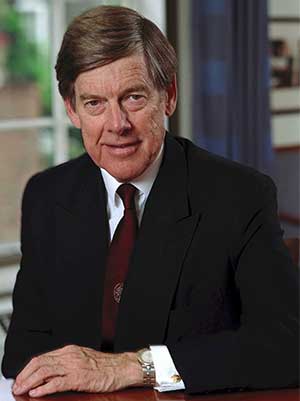 Alec Broers played a signiﬁcant role in the University of Cambridge’s rise as a major economic force and centre of excellence for high technology and was vice-chancellor between 1996 and 2003. He has always expressed strong views about the role of engineers in society, considering that any artiﬁcial barrier between engineering and the rest of science is just as damaging as the perceived division between the arts and sciences. He sees engineering and science as two sides of the same coin and believes the Royal Academy of Engineering is ideally placed to drive home this message.

Lord Broers spent nearly 20 years of his career in research with IBM in the USA, working at the Thomas J Watson Research Centre in New York, the East Fishkill Development Laboratory and at Corporate Headquarters.

When he arrived back in Cambridge, Lord Broers set up a nanofabrication laboraratory to extend the technology of miniaturisation to the atomic scale. He also developed his research on using electrons, X-rays and ultra-violet light in microscopy and on making microelectronic components.

Lord Broers has served on numerous national and international committees, including the Engineering and Physical Sciences Research Council, the Foresight Panel on Information Technology and the NATO Special Panel on Nanoscience and was a member of the government’s Council for Science and Technology. He was elected to the Royal Society in 1986, to the Academy in 1985 and became a Foreign Member of the US National Academy of Engineering in 1994.

He is on the Board of Directors of Vodafone and of RJ Mears LLC. In March 2004 he joined the Board of Plastic Logic as Non-executive Chairman and in December of the same year became Chairman of the House of Lords Science and Technology Committee.

On 21 June 2004, Her Majesty the Queen made him a life Peer in recognition of his contribution to engineering and higher education.