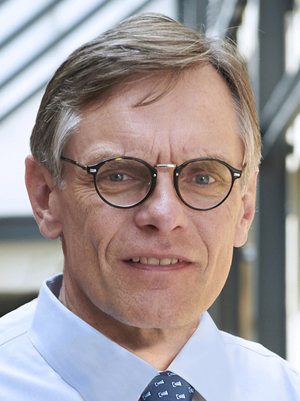 James M. Wilson, MD, PhD, is a Professor in the Perelman School of Medicine at the University of Pennsylvania where he has led an effort to develop the field of gene therapy. Dr. Wilson began his work in gene therapy during his graduate studies at the University of Michigan over 30 years ago. He then moved to Boston to do a residency in Internal Medicine at the Massachusetts General Hospital and continued his work in gene therapy at MIT. Dr. Wilson has been at the nexus of this emerging therapeutic area from its birth. He created the first and largest academic-based program in gene therapy after being recruited to Penn in 1993. He initially focused on the clinical translation of existing gene transfer technologies but soon redirected his efforts to the development of second and third generation gene transfer platforms; the first of which was licensed to a biotechnology company he founded that resulted in the first, and only, commercially approved gene therapy in the western hemisphere.

More recently, his laboratory discovered a family of viruses from primates that could be engineered to be very effective gene transfer vehicles. These so called "vectors" have become the technology platform of choice and have set the stage for the recent resurgence of the field of gene therapy. Dr. Wilson has also been active in facilitating the commercial development of these new gene therapy platforms through the establishment of several biotechnology companies. He is currently leading a national dialogue on the challenges of commercializing these potentially lifesaving treatments due to the disruptive nature they will have on traditional business models. Throughout his career, the focus of Dr. Wilson’s research has been rare inherited diseases, ranging from cystic fibrosis to dyslipidemias to a variety of metabolic disorders.

Dr. Wilson has published over 550 papers, reviews, commentaries and editorials in the peer-reviewed literature and is an inventor on over 117 patents. He was the second President of the American Society of Gene Therapy. Dr. Wilson was the 2014 recipient of the William Osler Patient Oriented Research Award of the University of Pennsylvania and received the 2015 Scientific Achievement Award from Pennsylvania Bio. Dr. Wilson was noted by the journal Nature Biotechnology to be the “second most productive bio-entrepreneur in life sciences.” Dr. Wilson is a Trustee at Albion College and founder of a 501(c)3 called Health Through Fitness in Orphan Diseases. He is also the Director of a bicycle team called Rare Disease Cycling, whose participants compete at a national level and help raise money for rare disease research.